The previously explored concepts are shared by most of the theologically developed strands of Hinduism. It is when we get to the nature and identity of the Supreme that the tradition appears complex. In the broader sense, Hinduism might well encompass every notion of God there is, including more primitive forms of polytheism. Within the more sophisticated schools of thought, particularly Vedanta, there are two main doctrines, each with many variations and each emphasising that there is one God. These are monism and monotheism.

The advaita (non-dual or monistic) schools consider the soul one with God in all respects. The numerous deities are considered more or less imaginary, representing aspects of the formless, all-pervading world-soul (Brahman). For advaitins, God is therefore entirely impersonal, though represented anthropomorphically for our own understanding. He is nirguna (without qualities).

The dvaita (dualistic/monotheistic) schools consider the soul and God be to eternally distinct even though both are Brahman (spirit). God is saguna, possessing spiritual attributes such as form and personhood, and activity. The dvaitins usually attribute different positions to the various deities.Their stance is usually theomorphic – i.e. holding that the human form is shaped on God. For its inclusion of other deities (gods and goddesses) it has been termed “inclusive monotheism” (some might call it henotheism).

Light passing through a prism 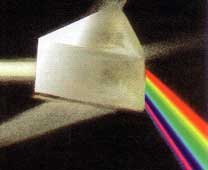 White light is broken down into different colours after passing though a prism (the monistic stance).

As the different colours, the constituents of light, are shown through a prism, so the different aspects of the all-pervading God are illustrated through the various deities.

The government with one prime minister

The government has many ministers and other officials but only one prime minister (the monotheistic stance). 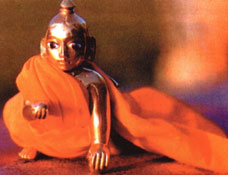 Types of worship, especially of the murti (sacred image), aim at perceiving the presence of God and developing a relationship with Him. This relationship is often compared to a family relationship, being sweet, loving, and devoid of fear and awe. God may even take an apparently equal or inferior role, as a servant, child or beleaguered lover. This murti (right) is of Bal Krishna (Baby Krishna), acting as the butter thief, worshipped by members of the Pushti-marg (see Modern Hindu Groups).

The Hindu concept of God is ultimately impersonal, and any personhood is anthropomorphic. The various gods and goddesses, and the stories about them, are merely ways by which Hindus relate to an impersonal Supreme.
There are many schools, mainly Vaishnavas but also within Shaivism and Shaktism, who believe that God possesses personality.

Sacred images are not worshipped as such but are merely meditational aids to help focus on the all-pervading world-soul (Brahman).
Again, not all Hindus believe exclusively in the impersonal feature of God. Many consider that he not only has form but appears as the murti to accept worship.

The monotheistic traditions …
This phrase, as used to denote the Semitic religions, wrongly implies that monotheism is absent from the Eastern religions, including Hinduism.

Hinduism is entirely inclusive and tolerant
There remain theological controversies as to the nature and identity of God, and there are documented instances of sectarian intolerance. Nonetheless, the notion of Sanatana­dharma makes the tradition relatively inclusive.

“Just as the illumination of a fire, which is situated in one place, is spread all over, the energies of the Supreme Lord, Parabrahman, are spread throughout the universe.”