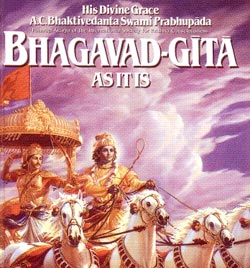 Of all the Hindu sacred books, Bhagavad-gita is perhaps the most popular. Although it principally supports the doctrine of Vedanta, it includes elements of the other five schools, especially sankhya.

Hinduism has neither a common doctrine nor a single scripture as the source of its various teachings. It places more emphasis on orthopraxy than orthodoxy, encouraging relative freedom of thought within tightly defined codes of conduct and morality.

More than Western traditions, it has succeeded in synthesising religion with philosophy, and religious commitment with a reflective search for truth. It does not generally exhort its followers to declare allegiance to a particular faith, belief, or creed.

Many Hindus call their tradition santana-dharma, the eternal law that governs everyone irrespective of belief. These truths regarding the universal law were divinely revealed to ancient sages. For many aeons they were passed down orally and only later written down, apparently around the start of the Kali-yuga when people’s memories began to deteriorate. Perhaps the most important sage was Vyasa (Badarayana), generally accredited with writing the Vedanta Sutras, Mahabharata and Bhagavad-gita.

As Hinduism developed, it did not reject its parent traditions, but modified and assimilated them into newer schools of thought. For example, the ancient Vedic notion of sacrifice, and the later philosophies of Sankhya and Yoga, have all been assimilated into the more recent school of Vedanta. Even the more sectarian sampradayas do not entirely reject other doctrines, but claim that they demonstrate a less complete understanding.

Despite a relatively inclusive approach, Hinduism has rejected those doctrines that do not accept its scriptural authority. Most notably these include Jainism, Buddhism, and the hedonistic philosophy of Charvaka. They are therefore called nastika, differentiating them from the accepted schools termed astika. There are six main astika systems, which are called darshanas (ways of seeing). The various groups and sub-groups within Hinduism usually subscribe to one or more of the six darshanas.

The six darshanas are grouped as three pairs of “sisters.” Each pair consists of one darshan dealing with theory and the other explaining the corresponding practice and methodology. For example, Sankhya forms the doctrinal basis for the discipline of yoga. Each pair is further explored in this section.

Some groups consider these schools to be hierarchical, with Vedanta the culmination of Vedic philosophy. This is somewhat supported by the fact that Vedanta means “the end of the Vedas” or, less literally, “the ultimate conclusion of knowledge.” Certainly, Vedanta today represents the more theologically developed strands of Hinduism, and forms the basis for many modern theistic traditions.