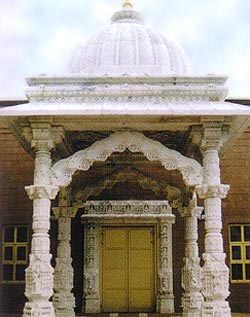 Hindus first started arriving in Britain in significant numbers shortly after the Second World War. However, the main wave of immigration, from East Africa, spanned the late sixties and early seventies. Most Hindus settled in inner-city areas, and were often relatively poor, many having lost their wealth upon expulsion from Uganda. They often became menial workers or started small businesses as grocers, newsagents and clothing manufacturers. The natural centres of these fledgling communities were the first austere temples, converted from old buildings such as church halls.

Settling in a foreign county had its obvious challenges. There were initial problems with diet, climate, and acceptance into the host community. As the second generation emerged, some youngsters felt unclear about their identity.

Hindu parents, concerned to preserved their heritage, recognised the need to articulate teachings previously handed down by family and cultural tradition. Temples and religious groups established formal education classes, in language, scripture, and the performing arts. Despite the different appeals for continuity, the cultural aspects of Hinduism have, quite naturally, undergone significant changes. Young ladies are now less likely to wear traditional dress, and Hindu youth have developed their own brands of popular music. There is evidence that many young Hindus have integrated well and developed high degrees of social and cultural competence in a pluralistic society.

The Hindu diaspora in Britain appears to be flourishing. Members are well established in professional fields – law, media, medicine, engineering, and accounting – and in many branches of business. Hindu students often top the charts in academic achievement. Many magnificent, purpose-built mandirs, replacing the converted church halls, testify to the growing prestige and influence of the Hindu community.

The tradition, with its rich culture, accommodating nature, and emphasis on personal spirituality, not only endures but makes a positive contribution towards contemporary British life.