Ashvattama, was the son of a powerful brahmana, but adopted the role of a warrior and fought at Kurukshetra. He could not maintain his duty, and transgressed all moral codes by killing unarmed warriors in their sleep. Krishna admonished him as “the unworthy son of a brahmana.”

Hinduism has often been termed “a way of life” and in India spirituality is evident wherever one turns. Even the predominant social structure – often considered a mundane concern – is derived from religious sources. The Rig Veda enjoins that human society be divided into four varnas (see The Four Varnas). The revealed nature of “Veda” suggests that the varna system is therefore not man-made but of divine origin. Some traditions therefore conclude that the four varnas are natural divisions, inherent in every human society, and that each varna accommodates the corresponding type of person.

Krishna teaches in the Gita that people are allocated to a specific varna according to two criteria, namely (1) guna (personal qualities) and (2) karma (aptitude for a type of work). He makes no mention of varna being determined by birth.

This differentiates the original varnashrama-dharma from the current caste system. The term “caste” originates from the Portuguese term casta, denoting purity of descent. It has come to refer not just to the four varnas, but to a whole system incorporating occupational sub-castes (jatis). In fact, current caste practices often give far more emphasis to jati than to varna. What really differentiates caste from varnashrama-dharma, though, is its hereditary nature – possibly an imposition by brahmanas attempting to consolidate their prestigious position. The fluidity of varnashrama-dharma is acknowledged by numerous textual references to people changing their varna. 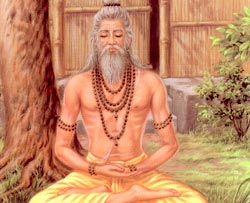 Vishvamitra, who was born in a kshatriya family but later qualified himself as a powerful brahmana

A young boy approached Gautama Muni and begged to become his student. It was customary that only respectable brahmanas would be accepted for such spiritual training. Gautama therefore asked, “Who is your father?” “That I do not know,” the boy replied. “So, please ask your mother.” The boy’s mother subsequently admitted, “My dear son, I have known many men. I do not know who is your father.” The boy returned to Gautama Muni and relayed the embarrassing message, “Sir, my mother also does not know who my father is.” Gautama Muni concluded, “Yes, you are a brahmana. I accept you because you are thoroughly honest.”

The rigid, hereditary caste system has been prevalent in India for centuries, and some Hindu writers trace its origins to the beginning of Kali-yuga or beyond. The following are five of its main elements. Some of the underpinning principles are derived from the original varnashrama-dharma structure. These practices, however applied, have certainly had significant influence on Hindu lifestyle.

Many Hindu marriages are now inter-racial and inter-religious. This still causes grief and concern to some parents, especially the highly caste-conscious. Modernisation has been instrumental in gradually eroding caste barriers.

The original varna system allowed men to adopt jobs different from their fathers, though generally they would follow in his footsteps.The later hereditary system forbade any mobility, and particularly prevented members of lower orders, whatever their real qualification, from securing prestigious jobs. Nowadays this practice is largely defunct, and many from lower classes enter reputable professions.

2. Social and economic interdependence
In the original system each varna, as part of the social body, served the others. Though lower varnas ministered to the higher, the over-riding notion was of service – to each other, to society ,and to the Supreme. The rigid caste system, however, has encouraged exploitation.

3. Purity
Each varna was expected to strive for progressive degrees of internal and external purity. Thus they would seek congenial company, avoiding intimate dealings with the less spiritually mature. Possibly because of pride, these considerations degenerated into condescension. This was taken to the extreme when brahmanas considered themselves polluted by the mere touch of another’s shadow.

4. Regulation of dietary habits
Commensality prohibited Hindus from eating with those of lower status. This was especially relevant when lower classes ate forbidden foods, such as meat, fish, and eggs. At large social gatherings, the food was cooked by brahmanas so as to be acceptable to all.

5. Inter-caste marriage
Endogamy refers to marriage between members of the same varna. This was to produce cultured children of high pedigree. Scripture forbids inter-marriage where the groom comes from a lower varna than his bride, although the reverse is acceptable. In practice, parents often insist that their children’s partners belong to the same varna and even the same jati. Children rejecting parents’ wishes have caused the Hindu community to re-evaluate caste practices.

“According to the three modes of material nature and the work associated with them, the four divisions of human society are created by Me.”

I believe that varnashrama-dharma is based on an appreciation of social and spiritual interdependence. Just as each part of the body has a specific function, so we all have a unique contribution to make to society. The brahmanas, like everyone else, have a service role but are expected to be exceptionally pure in thought and deed. For example, I would never eat meat, even if really hungry