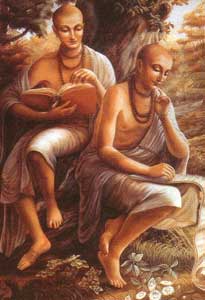 Hinduism is a richly visual tradition, illustrated by its paintings, sculpture, and distinctive rangoli patterns. There are many schools of classical art, such as Rajastani, Moghul, Kangra, Pahari, and Kalighat. The subjects are usually of a religious nature, featuring pastimes of various deities. Puja, the worship of the temple image, in itself is a unique and complex art form (see The Shrine).

One of the most enduring achievements of Indian civilisation is undoubtedly its architecture, whose roots derive from the Shilpa Shastra, one of the six Vedangas (see The Four Vedas). Many large temples date back to the period 1000–1300 CE, when architecture flourished throughout India. The Moghul Emperors (1526–1857) added their own distinctive style, spending lavishly on forts, mosques and palaces. For Hindus, the carving of sacred images and figurines was an art form in itself, requiring years of disciplined training. In the UK, the intricacies of Hindu sculpture and architecture are visible in many new purpose-built mandirs, which are replacing the old converted buildings.