In India there are thousands of tirthas (places of pilgrimage) visited by millions of people every year. Each is somehow special, often associated with a particular deity or saint, and offering its own particular boon or blessing. 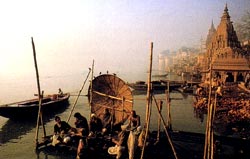 The most famous tirtha is Varanasi, also called Benares or Kashi. It is one of seven ancient holy towns (see Important Places of Pilgrimage). There are four great dhamas (holy places), which correspond to the four points of the compass and near which the great teacher Shankara (see Founders and Theologians) established his four main centres. Another key city is Allahabad, established on the site of the ancient city of Prayaga but renamed as “The City of Allah.” It is the one of the four main sites for the twelve-yearly Kumbha Mela. The others are Haridwar, Ujjain and Nasik (as shown here).

The map below shows all the major holy places mentioned and also the main sacred rivers and mountains. Further details of most of these sites can be found in this section.

Tirtha – literally means “ford” and refers to places where one can cross from the material world to the spiritual. Many sacred places are considered gateways to the higher realms and to a higher consciousness. Some are thought to be replicas of places within the spiritual realm.